Brookings is located on the beautiful Southern Oregon Coast six miles north of the California border on U.S. Highway 101. It is bounded by the Chetco River and Port of Brookings Harbor to the south and to the north, by Harris Beach State Park. 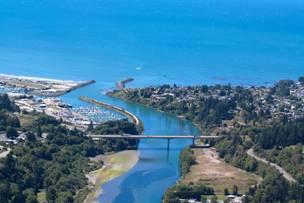 Brookings originally thrived on the lumber and commercial and sports fishing industries. Lily bulb farming was introduced in the 1920's. Although dwindling, lumber and fishing are still strong factors in the City's economy and the lily bulb farms, which are in a 12-mile area between Brookings and Smith River, California, produce 100% of the lily bulbs grown in North America. Because of these stable industries, Brookings is less dependent on the tourist trade than many Oregon coast cities.

Follow this link to see the City's Economic Profile (PDF)

The community of Brookings was originally established in 1913 by John E. Brookings, cousin to Robert S. Brookings of the Brookings Institute, when he moved his lumber business from the San Bernardino Mountains of Southern California. One of the first things John Brookings did when he relocated was to hire renowned architect, Bernard Maybeck, to lay out the street design for the core area of the City.

Since its incorporation in 1951, the City of Brookings has grown in population and area; it is now the largest city in Curry County. Much of the City's population growth since the 1980s, when Brookings was "discovered" as a great place to live, has been from retirees moving to the area to enjoy the mild climate, beautiful coastline, and many scenic and recreational amenities.

The social history of the area is chronicled in a book written by Edward G. Olsen in 1979. While the book is no longer in print, copies may be borrowed from the Chetco Community Public Library.